The U.S. Department of Energy’s Advanced Research Projects Agency-Energy (ARPA-E) has awarded a team from Duke University a major grant to develop a next-generation methane detector to sniff out natural gas leaks across America.

The grant is part of the Methane Observation Networks with Innovative Technology to Obtain Reductions (MONITOR) program focused on reducing methane emissions associated with energy production to build a more sustainable energy future. Led by Jeffrey Glass, professor of electrical and computer engineering and Hogg Family Director of Engineering Management & Entrepreneurship, the three-year, $3 million project will design, build and commercialize a miniaturized, low-cost mass spectrometer that can serve as an efficient and sensitive methane detector.

“Developing a miniature mass spectrometer to measure methane leaks at well platforms will translate into reduced emissions and less waste of natural gas,” said Glass. “It fits into ARPA-E’s goals of becoming less dependent on foreign oil, and it will also help decrease the impact of the natural gas industry on the environment.”

A mass spectrometer can tell many elements and chemicals apart by variations in how they move through the device caused by differences in their mass. After passing through a narrow slit, a molecule’s flight path is determined largely by its size, causing different molecules to hit a detector in different places. 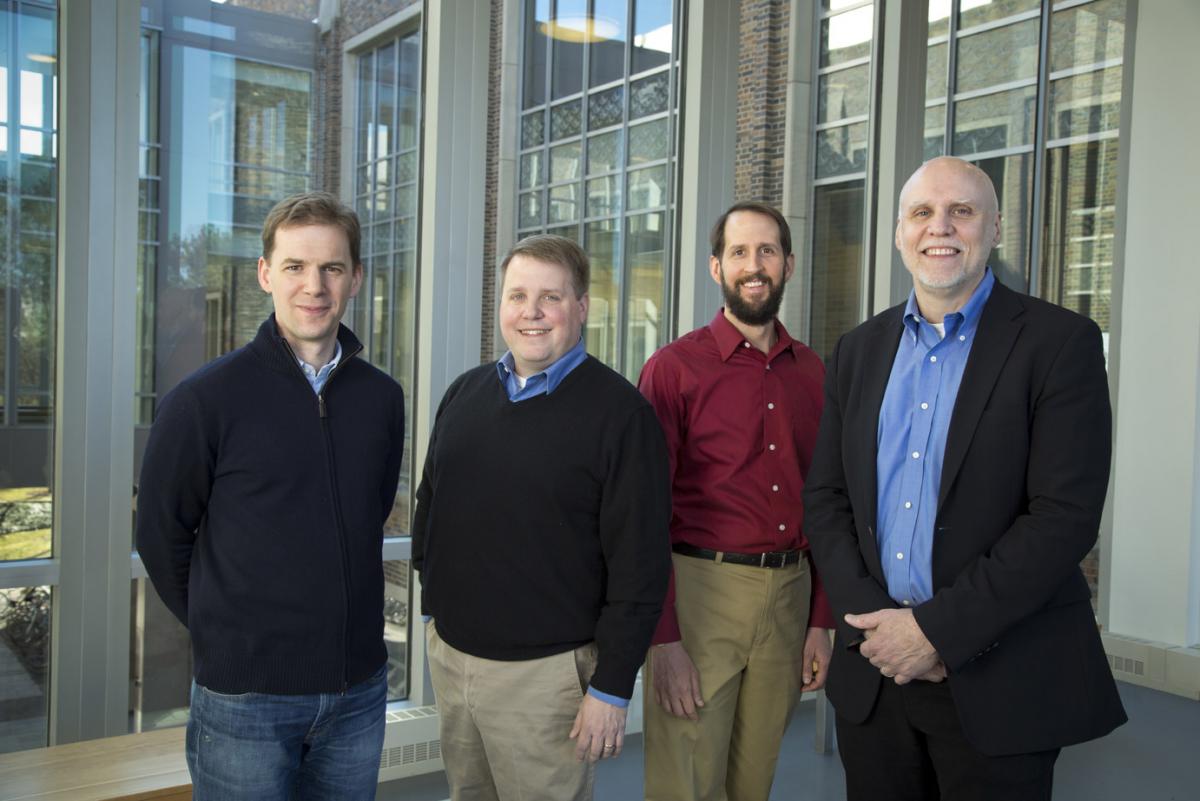 The Duke team’s design, called a coded aperture, uses many slits, allowing many more molecules to pass through in a smaller amount of time. The result is a jumbled mess on the other side—but a jumbled mess that can be decoded.

“One of the reasons Duke was awarded this grant is because we have a group here that’s fantastic at designing and using coded apertures,” said Michael Gehm, associate professor of electrical and computer engineering at Duke and a member of the project team. “We’ve been doing this with light for a long time, and we’re the first group in the world to take on this approach with ions instead of photons in a major initiative.”

According to Charles Parker, manager of the Glass Laboratory, the fact that the design allows many more molecules to pass through gives it a much higher sensitivity than a traditional mass spectrometer, with no loss in accuracy. Not only does this allow the spectrometer to detect lower levels of a molecule such as methane, it also cuts down on size and cost.

“The end goal of this project is to commercialize a mass spectrometer that is around 20 pounds and can fit in a backpack,” said Parker. “That’s a big improvement from today’s behemoths weighing hundreds of pounds that have to be transported by truck, which is why they’re rarely transported at all.”

Such a small and sensitive methane detector could be carried to natural gas platforms and other parts of the infrastructure that could have potentially large leaks to check for escaping methane. The goal is to eliminate leaks to reduce methane emissions into the environment while simultaneously reducing America’s dependence on foreign oil.

“Although this grant is focused on engineering a methane detector for well platforms, it could eventually be used from well head to end user,” said Jason Amsden, a research scientist in Glass’s lab, who sees potential for the design to be used to check small commercial pipelines and connections in consumers’ homes.

Future applications are expected to expand well beyond environmental detection.  “I expect it will eventually be used in every doctor’s office,” added Glass. “As we move into an era of personalized medicine, a small, cost-efficient device like this could look at a person’s individual biochemical characteristics. Rather than having to send samples out, clinicians could get their answers in real-time at the point of care.”

Because ARPA-E always has its eye on future commercialization prospects of the projects it funds, Duke is partnering with RTI International along with several students in Duke’s Masters of Engineering Management program to look at potential spin-off companies or tech transfer strategies. RTI International’s Innovation Advisors group specializes in commercialization of early stage technologies making them a natural choice for collaboration on the project.